Back to school with Shakespeare

For many visitors to Stratford Upon Avon, and there are over 2.5 million visitors a year, the opportunity to walk in the footsteps of William Shakespeare, widely regarded as the worlds greatest playwright and poet, is the main reason they decide to visit this small Warwickshire market town.

With more than eight hundred years of history, the town still retains many of the original buildings which would have been very familiar to Shakespeare during the sixteenth century.

Most visitors head straight for the great man`s birthplace on Henley Street and will later make their way along the banks of the beautiful River Avon to Holy Trinity Church, where the `Bard of Avon` is buried.

There are six unique properties in and around Stratford-upon-Avon which have important associations with the life of William Shakespeare. There are three Town Houses, Shakespeare`s Birthplace, New Place and Hall`s Croft plus two Country properties, Anne Hathaway`s Cottage and Mary Arden`s Farm. These five properties are managed by The Shakespeare Birthplace Trust and are open to visitors all year round.

In April 2016 an important sixth addition to the `Stratford Shakespearean Trail` was included with the opening of Shakespeare`s Schoolroom & Guildhall, after a £1.8m restoration chiefly funded by the Heritage Lottery Fund, as part of the town’s commemoration of the 400th anniversary of the death of its most famous son.

This captivating timber framed building is sandwiched between the Guild Chapel and the Alms-houses on Church Street. Shakespeare’s still-functioning school room is part of the King Edward VI School, the direct successor to the grammar school, King’s New School, attended by Shakespeare from about 1571. Although there are no surviving records of the pupils who attended the school during the 16th Century it is universally accepted that this was Shakespeare’s school, about a quarter-mile (400 m) from his home.

The students and teachers at the school must have been getting used to people looking in through the windows, but now the tourists have been invited inside and given a unique opportunity to sit in on a Tudor grammar school lesson, just as William Shakespeare would have done. The rooms are still used today for school assemblies and classes during term times up until 11am.

The school’s value to Shakespeare must have been immense. This the building where he learned so much, witnessed so much, that motivated him during the rest of his life. It is of worldwide importance in the history of Shakespeare. The ground floor room still has its oak beamed ceiling and stone slab floor. Originally the plaster would have been covered with wall paintings, but these were covered over after the Guild was disbanded.

A whole wall emerged during the conservation work, which revealed some faint but familiar images of the Virgin Mary and the Trinity, deliberately spoilt and lime washed during the Reformation, I was informed, possibly by Shakespeare’s own father John, during his short term as mayor of the town.

These are now protected by a glass screen behind the top table. I sat and watched a short video presentation which showed what the painting might have looked like, before the screen rolled up to reveal what remains on the wall. In the centre is God the Father holding the crucified Christ. On either side are the Virgin Mary and St John. A well-preserved painting of the John the Baptist also emerged on a wooden beam, holding a lamb, still with traces of gilding on his staff. This section was most impressive.

The half-timbered medieval Guildhall dates to 1418-20 and was built for the Guild of the Holy Cross. All local merchants and craftsmen belonged to the Guild during the Middle Ages, helping them to widen their circle of business and social contacts and to increase their authority in town affairs.  After the Guilds were broken up by Henry VIII they were taken over by the recently created town council who controlled everything in Stratford from policing the streets to checking the quality of ale.

The two upstairs rooms became the school. The first room is a reconstruction of the original room Shakespeare would have studied in a class of 40 boys, from the age of seven to fifteen, taught together in the same room by a single teacher. They would sit on long wooden benches, called “forms” facing each other in age order for a school day which would have gone on from 6am to 6pm with a two hour lunch break from 11-1pm. All of their equipment would have been kept under the bench.

At the front was the teacher’s table and chair on a small raised platform. Close to hand was the birch to dispense appropriate punishment. In Shakespeare’s time the teacher was Master Jenkins, who at the time I visited was present in class, fully dressed in period costume! The performance guides were excellent, remaining in character at all times, even when I asked Master Jenkins for a `selfie`!

Having gone into the Guildhall and schoolrooms straight from the busy streets of Stratford, Master Jenkins provided a useful commentary about what the school would had been like in the sixteenth century, with open fields and pastures, extending outside the school’s windows.

It helped a great deal to be able to speak with Master Jenkins, about what the day to day educational experience for Shakespeare and his compatriots would have been like. I was also allowed to dress as a school master, complete with white ruff, gown and punishment birch stick, which I enjoyed immensely!

It was a classical education, although schools varied in quality during the Elizabethan era, all grammar school curricula were largely similar: the basic Latin text was standardised by a royal decree and the school would have provided an intensive education in grammar based upon Latin classical authors with a strong emphasis on rote learning, Latin grammar, academic texts, history. English and numeracy skills. 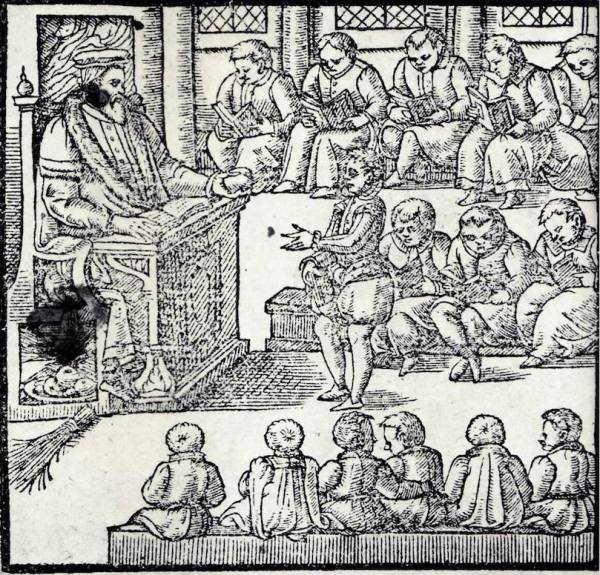 I was told Shakespeare didn’t go to university and all of his formal education would have been in this single room, remarkable when you consider the brilliantly diverse plays he wrote.

`One of the most atmospheric, magical and important buildings in the whole of Britain……….it is nothing but a memory room for the town and nation`

The second room is a 19th Century classroom where the desk tops on which many of today’s students still sit were covered in graffiti, the initials of past students from long ago stand out clearly amongst hand cut images of boats and ships surrounded by further examples of graffiti carved onto the plaster walls. This classroom, under its big wooden ceiling beams is where Shakespeare possibly saw his very first play and came into contact with professional actors.

Travelling players visiting the town had to perform before the local council, before they were licensed to appear before the public. The schoolroom was the location for these private performances and William would have attended with his father, who was part of the invited audience. Performers, arriving with drums, trumpets and costumes, must have made a huge impression on a young William. Beside the two schoolrooms is the Master’s Chamber, complete with fireplace.

The performance guides and other staff, including a student of the present-day school on reception, were all very knowledgeable, not only about the impact the school environment would have had on the educational development of William Shakespeare, but more general information about schooling across the country in the sixteenth century and what the town of Stratford would have been like, when Shakespeare attended the school.

The building has so much character and history that I was able to imagine the sights and sounds across the two rooms, full of children of various ages with heads down learning from tough Latin texts, repeating loudly passages of grammar or listening keenly to the words of their strict masters. If you are in a group of visitors, you will be invited to join in a class and learn some Latin text seated on replica wooden benches.

If you are following in the footsteps of William Shakespeare, make sure you also visit his birthplace and explore the house where he was born and grew up, then stroll along to New Place, which was his family home from 1597 until he died in the house in 1616. It is believed that after an evening out with the playwright Ben Jonson and poet Michael Drayton, Shakespeare was taken ill and subsequently died, aged just 52. One of the few brick buildings in Stratford at the time, New Place was a splendid home, appropriate to one of the country’s most established playwrights.

Although the house was destroyed by a later, rather eccentric, owner, the location is now home to a garden which includes a Mulberry Tree, said to have been grown from a cutting planted by Shakespeare himself. A footprint on the ground reveals the original Shakespeare family home, in what is now a Memorial Garden, next door to the building known as Nash`s​ House, which was once owned by Thomas Nash, the wealthy first husband of Shakespeare`s granddaughter, Elizabeth.

Go on a little further and explore the beautifully furnished Jacobean home of Shakespeare’s daughter Susanna at Hall’s Croft.

To experience all that Shakespeare`s Stratford has to offer including the outlying properties of Anne Hathaway`s Cottage and Mary Arden`s Farm you should consider staying in the town for a day or two. You should also consider joining one of the Stratford Walks which gives an even greater insight into sixteenth century Stratford Upon Avon and snippets of information about Shakespeare`s life. The Royal Shakespeare Company is of course the only place to go and fully appreciate the work of William Shakespeare by watching one of his plays.

The schoolrooms offer a unique insight into Shakespeare`s learning and education, an opportunity not to be missed, I loved it!

As well as William Shakespeare, King Edward VI School has many other famous ‘Old Boys’ including:

The actor and director Tim Pigott-Smith

Rex Warneford VC, who shot down a German Zeppelin in 1915

3 thoughts on “Back to School with Shakespeare”