Roll Up, Roll Up – The Magical Mystery Tour is waiting to take you away

Instead of driving around all the landmarks associated with The Beatles yourself, hop on the colourful Magical Mystery Tour coach and get driven around the city with an informative, knowledgeable and entertaining tour guide. Our guide was JJ or James the younger brother of Holly Johnson, the lead singer of Frankie Goes to Hollywood of Relax fame. 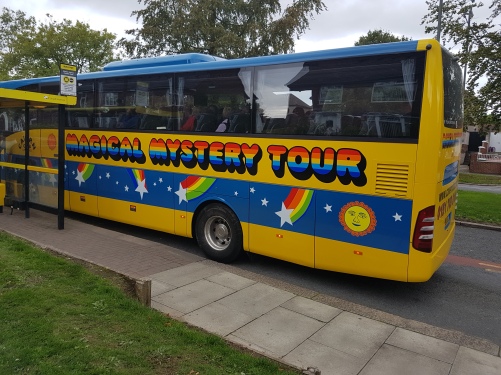 My tour started in the Albert Dock just metres from the entrance to The Beatles Story, from which we had just left. At two hours long, I thought it was well worth letting someone else do the driving around what was to become some very tight roads and even more problematic parking. Having an excellent local driver and knowledgeable tour guide, interspersed with Beatles music at appropriate points around the tour made for a comfortable and relaxed ride around the Beatles sites.

JJ was a great guide having been born in Liverpool he knew a great deal about the city, The Beatles and many other Merseyside musicians. We stopped for photo opportunities on Penny Lane, Strawberry Field, the childhood home of Ringo Starr, George Harrison’s birthplace, St Peter’s Church Hall, where John and Paul met for the first time, John Lennon’s childhood home at Mendips, Paul McCartney’s childhood home, some of the former schools and colleges of John, Paul, George and Ringo including the Art College and the Liverpool Institute for the Performing Arts (LIPA) at which Paul takes time out to award the degree certificates to the successful students every year.

Many more Beatles locations were pointed out to us as we travelled around the city centre and suburbs of Liverpool including the Roman Catholic Cathedral, Anglican Cathedral, College of Art, Philharmonic Hall, Adelphi Hotel and the Empress Pub which is on the cover of Ringo`s first solo Album called Sentimental Journey.

At Penny Lane I got out of the coach and had my photograph alongside the famous road sign. It must have been recently replaced after Paul signed it during his Car Pool with James Corden as there was just one message written on it! The one at the top of the street was covered in messages.

I also took a stroll down Forthlin Road to view the McCartney family home at number 20. The house recently featured in the James Corden`s Carpool Karaoke featuring Paul McCartney, in which they cruise round places familiar to Paul on their own Magical Mystery Tour. It was amusing to hear Paul talking about sitting in the toilet with his guitar because of the better acoustics in the smallest room in the house!

The house is now owned by the National Trust and the lady on the Car Pool came out of the house as we stood outside. At least this time Paul got in as on the two previous occasions he visited there was no one available to let him in! Another photo opportunity!

At Mendips, the house that John lived at between 1944-1963 we stayed on the coach but we were unable to see much of the house as the hedgerow had been allowed to grow too tall. Sort it out National Trust!

I could just about see the Blue Plaque on the front of the house commemorating Mendips as the former home of John Lennon. Fortunately, Mendips was one of the places I had visited on a previous visit to Liverpool so here is a picture of me at Mendips on an earlier visit.

The former home of Ringo Starr at Admiral Grove appeared to be in a state of repair and rebuilding of the whole street, so I could not see too much of any interest and I also decided to stay on the coach at Arnold Grove, a former home and birthplace of George Harrison. Those who ventured out from the coach did not look too impressed when they returned.

Strawberry Field, the iconic site immortalised by John Lennon in The Beatles hit, ‘Strawberry Fields Forever’, has recently opened its iconic red gates to the public for the first time. 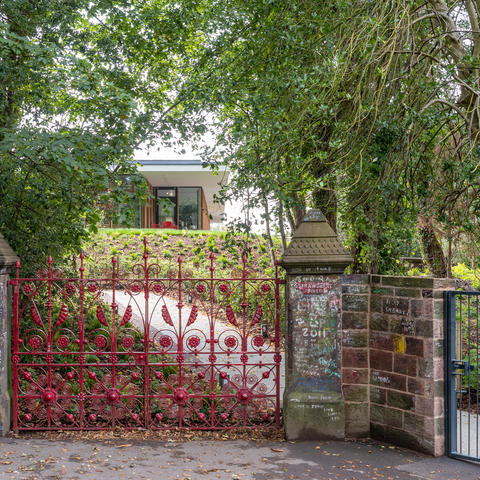 Strawberry Field as it is today!

An interactive exhibition tells fascinating stories about the house, The Salvation Army, John Lennon’s childhood and the writing and recording of ‘Strawberry Fields Forever’. I was unable to visit the exhibition at the time, but I am eagerly looking forward to doing so, on my next visit to Liverpool. 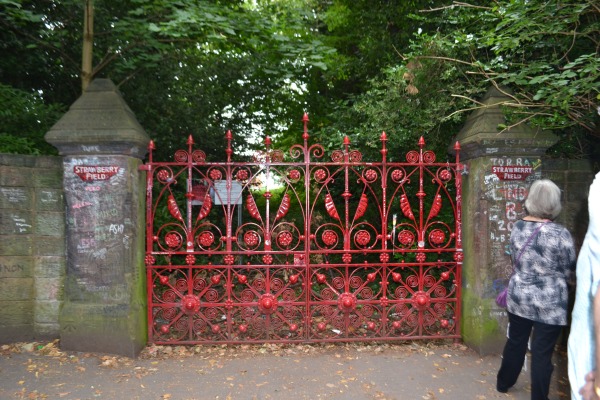 The Iconic gates on my first ever visit some years ago.

The Magical Mystery Tour is the only Beatles tour that finishes at the legendary Cavern Club. Tour tickets also give you free general admission to the Cavern on the evening of your tour date and you can claim your free gift at the bar, a postcard! An evening not to be missed!

It is a safe, educational and comfortable way of seeing the Beatles sights without the aggravation and problems you would encounter if you drove yourself and I learnt a lot more things about The Beatles, which I did not know before the tour. 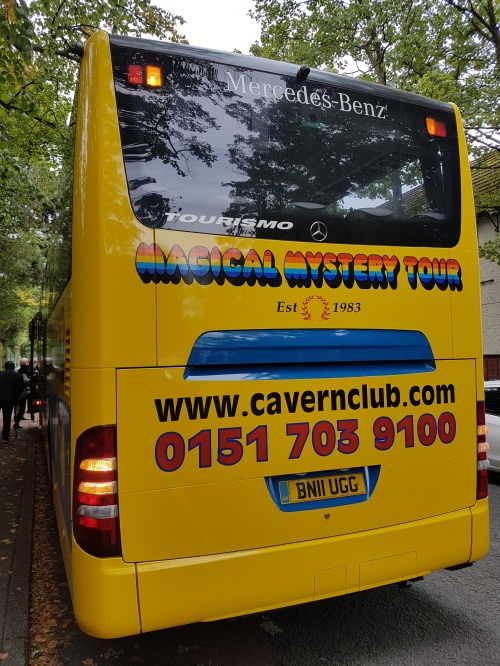 Disclosure: My visit was courtesy of The Magical Mystery Tour – Cavern Club Tours The views and comments expressed are as usual my own.