When the Beatles released their debut single Love Me Do in October 1962, I was an eight-year-old junior school pupil and by the time I had reached my sixteenth birthday and left school, The Beatles had officially split!

Just eight years apart but growing up during those formative years listening to one of the greatest rock and pop bands during my early teens has last left a mark on my musical appreciation for the band. I never saw The Beatles live, I did see Paul McCartney in Birmingham during the early nineties but nevertheless I have always been a fan of The Beatles, their music, films, books, personalities and imagery.

I have visited Liverpool several times before, briefly spending a short time in The Cavern Club on my first visit and on another occasion I joined a tour around The Casbah Coffee Club, guided by Vincent “Roag” Best, brother of Pete Best and son of Neil Aspinall, Beatles road manager and Apple Corp Chief Executive. Roag has recently opened the Magical History Museum on the opposite side of Mathew Street from the Cavern Club to house some of his own personal collection of Beatles memorabilia.

The Cavern Club is one of the most famous music clubs in the world and will forever be associated with the Beatles, despite the fact many other bands and musicians have played at the venue including Queen, Adele, The Kinks, Arctic Monkeys, Jake Bugg, Travis and Oasis amongst many others. The Beatles played their final gig at The Cavern in 1963 having made an incredible 292 performances between February 1961 – August 1963. 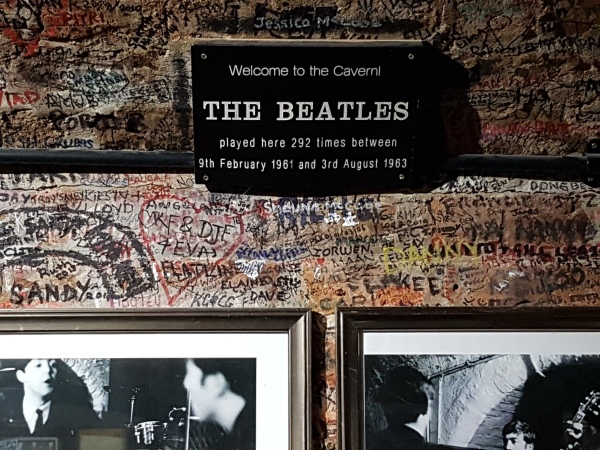 I was visiting on a Sunday evening but the club and Mathew Street on which it is located was packed with tourists, locals and other curious bystanders, with a cacophony of sounds thumping out from every doorway. I could not resist the temptation to have my photograph taken with a sculpture of a leaning John Lennon opposite the Cavern entrance. It was a coincidence that I too was wearing a leather jacket!

There is also a statue of the late singer and former Cavern Club cloakroom attendant Cilla Black just a few steps away from the club entrance, placed there by her sons. The original entrance to the Cavern Club is a little further down Mathew Street.

The Cavern Club really is a great night out, everyone there is looking to have a good time, singing and dancing along to the resident band and various other musicians and performers who did not let us down. I found myself singing along to the now familiar tunes of the Beatles and other Merseybeat luminaries such as the Searchers, Gerry and the Pacemakers and Billy J Kramer and the Dakotas.

The Cavern Club still has a magnetic appeal to Beatles fans and despite regular stories about its authenticity, if you love the Beatles you must visit and get your pictures down by the stage, on the stairwell or outside the entrance, something which I also did. Paul McCartney played his final gig of the twentieth century on the stage of The Cavern Club in December of 1999 giving the club the authentic seal of renewed approval and endorsement from one of its leading star performers!

A rendition of Chuck Berrys `Johnny B Goode got the Club bouncing helped by what I thought were reasonably priced drinks considering I had paid just £2.50 to enter. After 8.00pm in the evening the admission price rises to £4. I had such a good night I returned to the club the following day at the end of my Magical Mystery Tour to enjoy a few more hours of live music.

Visitors names scrawled across the walls

Memorabilia decorates the walls along with the signatures and name checks of thousands of visitors who have made the pilgrimage over the years. I simply loved The Cavern, it lives up to its reputation as a place for a good night out. If you love the music of The Beatles, it is going to be your number one stop on your tour of Liverpool.

Disclosure: My visit was courtesy of The Cavern Club. The views and comments expressed are as usual my own.