On a recent visit to the county town of Warwick I was invited to visit the medieval timber framed buildings of the Lord Leycester Hospital, located next to the West Gate on the High Street. These ancient group of buildings, originally the home of the Warwick Guilds, comprises a chantry chapel, a Great Hall, Guildhall and various other medieval buildings, mainly from the 14th century.

The Lord Leycester as its more commonly referred locally is a charity supporting ex-servicemen and not surprisingly is a Grade I listed building. I soon discovered that it was never a Hospital! The word Hospital in this context meant shelter or refuge. It was acquired by Robert Dudley, Earl of Leycester as a home or `shelter` for retired – ex – servicemen and their wives, which it remains to this very day.

When I arrived at the Lord Leyster I was greeted by one of the brethren. He was beautifully attired in his ceremonial uniform. He briefly told me about the Lord Leyster Hospital and kindly agreed to have his photograph taken. He was very knowledgeable and answered all of my questions.

He apologised that none of the Brethren were able to act as my guide that day because The Warwick Literary Festival was taking place and they were occupied in directing guests, but he did give me a very helpful written guide. I then set off to explore taking far too many photographs in the process because there are so many interesting things to look at and muse over!

Historically the buildings also includes one of the finest examples in Britain of medieval courtyard architecture. The decorative black & white gables which were added during the Victorian Era include the coats of arms of families associated with the Lord Leyster Hospital and its patrons the Sidney family over the past 450 years! 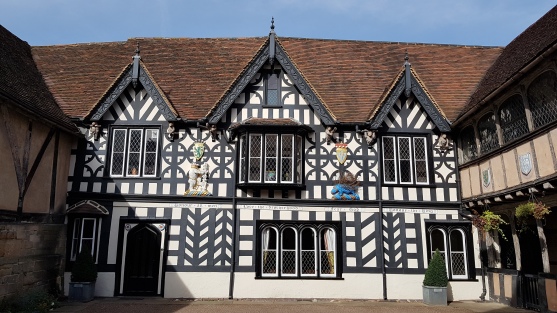 Clustered round the Norman gateway into the town, the 12th Century Chantry Chapel of St James sits above it. The Chapel was a real oasis of calm and peace. I sat and reflected whilst I enjoyed the peace & quiet of this sanctuary from the world outside.

The site was restored in the 1950s and 60s and the hospital was opened after its restoration by Queen Elizabeth, the Queen Mother, on 3 November 1966.

For nearly 200 years this site was home to Warwick’s medieval Guilds but during the reign of Queen Elizabeth I the buildings became, under the patronage of Robert Dudley, Earl of Leicester, a place of retirement for old soldiers who had fought in the Elizabethan era wars. These soldiers are  known as the Brethren and with the Master, still live within the walls of the building.

The current Master is Dr. Heidi L Meyer LLD (Hon), MSc, BSC who is a former British Amy officer and first female to be appointed.  The first Master of the Hospital, Reverend Ralph Griffiths IPP, was installed by Robert Dudley 1st Earl of Leicester – his job was to oversee the management of the foundation and the Brethren.

Since then the Lord Leycester has had thirty three Masters in the job! The most famous Master is the Reverend Thomas Cartwright who was the leader of the Puritan movement during the Elizabethan era – and a well known revolutionary! Up until World War 2, the Masters were clergymen but thereafter they had to have served in the military.

Today the Hospital is run by the Master, a retired officer of the Armed Forces and eight ex-servicemen and their wives or husbands, who are provided with flats in return for their past services to their country and in return they also act as guides to visitors, often in ceremonial uniform. The Master and Brethren are a living legacy of almost 450 years of history! Every morning the Brethren meet in St James Chapel and pray together the words written by their founder Robert Dudley. ​

There is so much history and information to absorb I found the opportunity to sit out in the gardens a real delight. The gardens are well cared for and maintained. I particularly liked the raised balcony and summer house at the far end of the Masters Garden. From this high vantage point I could look out across the whole of the gardens.

The beautiful, tranquil walled Master’s Garden also boasts a 2,000 year old “nilometer”which was  used in ancient Egypt to measure the height of the Nile and a small conical thatched gazebo. Beneath the gazebo there was a stove and what remains of a hypocaust or underfloor heating system of an early Victorian pineapple pit. The Masters Garden is set out as a Victorian Garden but once you pass under the  Norman Arch, you see the cultivated garden where much of the fruit, vegetables and herbs are grown for the Brethren’s Kitchen.​Next to it is the Knot Garden with its design and symbolism echoing Tudor times. You would not expect to find such beautifully maintained and ancient gardens in the centre of a large market town.

The Brethren’s Kitchen has been serving food for 500 years to Kings and Queens, Guildsmen, Tudor Earls, and Victorian literary and artistic figures. The Brethren ate communally in the Kitchen from Elizabethan times right up to the 1960’s.  In the far corner is a cupboard from Elizabeth I given to the Brethren for hanging their cloaks. Today the Kitchen is a very popular cafe open to visitors and non-visitors for home cooked food breakfasts, lunches and afternoon cream teas! 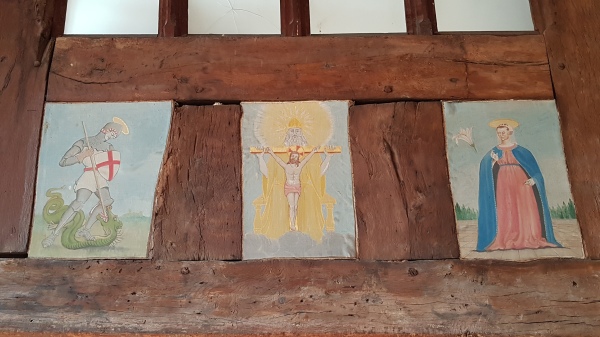 These extraordinary medieval buildings are open to visitors and can be hired for civil ceremonies, dinners, parties and weddings.​ All of the proceeds go towards caring for the buildings and the people who live in them, positively for centuries to come!

Because of the uniqueness of the buildings it is not surprising that these buildings have been used as a stage set and backdrop for many historical-set television productions including Pride and Prejudice, Tom Jones, Moll Flanders, the 2007 Doctor Who episode – The Shakespeare Code and more recently Shakespeare & Hathaway – Private Investigators. I was told a second series of Shakespeare & Hathaway was starting to be filmed the following week. I was given the opportunity to see the office used for the series.

I have visited Warwick Castle on a number of occasions and sometimes the crowds, the overt commercialisation of the castle and its history can be a little overpowering, so it was a very different experience, spending some real quality time at the Lord Leycester. It felt like a much more dignified and restrained representation of history in authentic and realistic surroundings! After all this is a place where people still live and spend their lives, carrying on the traditions of earlier Brethren, they are all part of its living history!

Don’t leave Warwick until you’ve paid a visit. You will not be disappointed !

My visit was courtesy of the Lord Leyster Hospital but as always, any comments and opinions are my own. Much of the detailed factual information has been taken from their official website.